The Clothes of Nakedness, 1998, Benjamin Kwakye ** 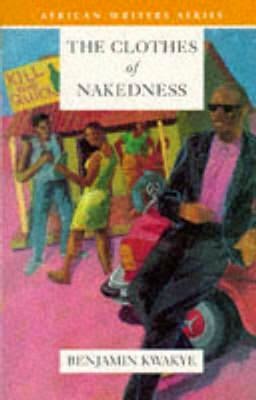 This novel came up on my radar as part of my reading challenge since it won the literary award Commonwealth Writers' Prize for Best First Book in Africa 1999. Apart from that, I had previously fell in love with an interview the writer gave to one of my fellow blogger, which encouraged me to want to read his works, which as well moved me to get in touch with him. His books were in my TBR list for a longtime before I at last purchased one "The Clothes of Nakedness", I am glad I did not buy all of them. I can be an impulsive book buyer sometimes!

Mystique Mysterious, a stranger finds a job for Bukhari on the condition that he would  receive fifteen to twenty percent of his monthly salary. Bukhari, finding out last minute did not object. Not only that, this stranger also persuaded him to be unfaithful to his wife, persuaded him to stay out late and drink, persuaded him to squander his money and pay little or no attention to his wife and son. I wonder why Bukhari should give in to such persuasiveness. It goes with out saying that it is the beginning of his downfall. Though, the whole incident is so surreal to me.

In my opinion, this novel leaves a lot to be desired. Perhaps, it's just me. I read a lot and have suddenly started expecting more from writers. Which does not mean that I need a novel to be read along with a dictionary. I simply take two things into consideration; storyline and narrative. It might seem simple, however, it is not a task many writers seem to accomplish. How strong is your storyline and how well can you put it into writing engagingly? I think that is what make up an interesting read and as a matter of fact, also make a distinguished writer.

Back to my review of The Clothes of Nakedness, the book was well written, however the storyline was flimsy. The writer created characters that accepted without question whatever that is thrown onto them however implausible it may seem. I know it is fiction, nevertheless, I believe there should be a certain amount of realism in the story being told.