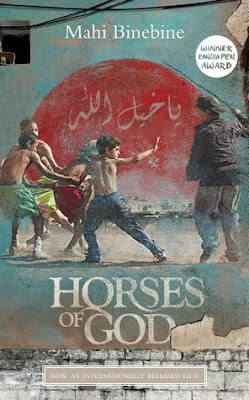 Horses of God tells the story of a boy who lives in abject poverty and squalor in Morocco, falls into Islamic indoctrination and is convinced to carry out a jihad. This book actually is written in remembrance of the 2003 Casablanca bombing. One of the suicide bombers from his grave narrates the story of his life and what led him to become a suicide bomber.

It is not a novel I particularly enjoyed however, I must say it is brilliantly written. An interesting read as we live in an era where there has been more often than not suicide attacks,  a situation that creates
mental discomfort. This books takes you right into the lives of the jihadists where they tell you their story before their death from the beginning.

In Horses of God, the boys are marginalised, their parents couldn't care less as they've got a lot to deal with themselves. These children are easily manipulated, their young minds get tapped into and in a blink of an eye they are being convinced that others are the reason their life is meaningless.

Mahi Binebine is the first Moroccan novelist whose book I have read, I look forward to reading more from the country. My first read of 2018.

The novel has been turned into a motion picture and I'd like to see it.

What is your first read of the year? Have you read this novel? What other novels by Moroccan writers would you recommend?