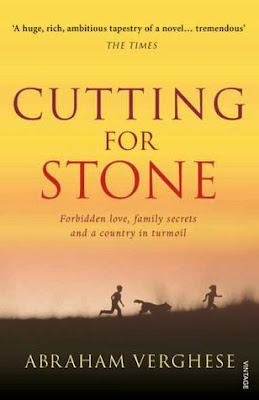 This novel grasp my attention from the very beginning to the end. A young nun leaving her Indian hometown to serve in Africa ended up in Ethiopia with a Surgeon she met in the ship, whose life she saved.

They got involved, she became pregnant and died during labour after giving birth to identical twin brothers, Marion and Shiva.

Thomas, the surgeon, fled leaving behind his identical twins. Hema and Ghosh, Thomas' colleague and friend buried Mary, raised Marion and Shiva with so much love as if they were theirs, of course telling them the truth about their biological parents.

The twin brothers grew up in Ethiopia of the sixties, seventies and eighties, in a missionary hospital where they were born, where their parents met and worked and where their mother is buried. Their non biologic parents are doctors too and work in that same hospital.

You see, the writer Abraham Verghese, who is also a doctor has set a perfect scenario to narrate his story. His medical narrative is intense, the cutting and stitching of the human body is in detail. Do not miss this out, Marion the twin brother is the main narrator and guess what?
He too is a doctor, a trauma surgeon.  If you are active in health practices, I assure you will definitely enjoy this novel. If not, you still will.

In addition, the political background of Ethiopia at that time which, determined the development of the story was dutifully narrated on.

Cutting for Stone is an intense novel, a powerful tale about real love, relationship, forgiveness, fear and failure. A page turner,  an engaging and compelling read, emotional too.  At a point it brought tears to my eyes and I had to stop, breath in and out before reading again. The characters with their flaws are fascinating and very real. The writing style is rich and easy to follow, it goes without saying that I highly recommend. It is good literature and a masterpiece.

No matter how much you have suffered, when love is offered to you just grab it. It is a total waste of time to look for greatness where there is only suffering and disillusionment.