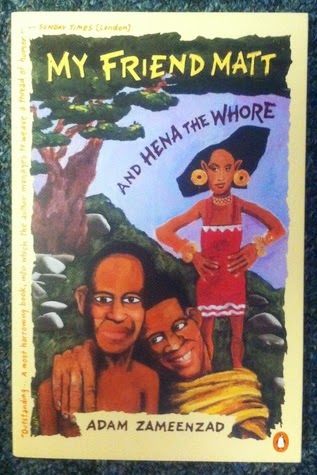 One peculiar fiction written through the voice and eyes of a ten year old. Peculiar, because the young lad narrates on such a devastating war in his country and still makes you laugh.
My Friend Matt and Hena the Whore is set in a fictitious country in Africa. Matt, Golam, Hena and Kimo the narrator are childhood friends, all under the age of ten. Funny, witty, inventive and resourceful, always on the watch to lend a hand. When civil war erupted, they volunteered to leave their village in order to provide for their families and villagers. They never knew it was the beginning of their misfortune.  Now,  this is not like Say You're One of Them by Uwem Akpan that was so uncomfortable to read due to the constant blatant "poverty porn" as one of my friends (whom I agree with) puts it. Kimo, the narrator is extremely honest in his narrative, his childhood manners always present in the way he talks. The author did a wonderful job.

In the quote below, Kimo still did not understand that Pasadena, California, USA is a place that exists on earth and not a type of hell. Throughout the novel he was very adamant about not wanting himself nor his loved ones to go there after death.

I wonder if he is right that the Spirit of Grandma will be lost in "eternal darkness", or go to "Hell", or worst of all, to Pasadena, California, USA. That's where the missionary bloke had run out from, and where he said was "rife with carnal sin and mortal evil".

In a different situation an adult was trying to make sense with a pointless debate. Talk about the pot calling kettle black.

Adam Zameenzad, the author is herein addressing the consequences of ruthless and senseless war through the eyes and voice of a child and still makes you laugh. Children who refuse to loose their innocence even when the war in their country was at full blast with the shootings, bombings, famine, abuse and death of their loved ones. In the dedication Adam writes:

In the hope that at some stage in the life of this planet no man or woman will have to experience the shame of writing another book like this one again.

My copy of this novel was published by Fourth Estate Limited in Great Britain. 218 pages.
Posted by Mary Okeke Reviews