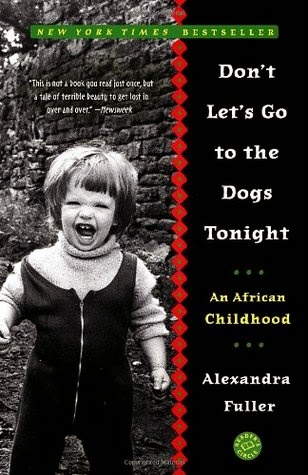 This book was about to be discarded before I rescued it from the rubbish bin. I kept it on my shelf for years, gathering dust, not sure if to read or not to read. That was the question. I finally read it and regretted why I did not do so for so long.
Don't Let's Go to the Dogs Tonight is too real to be true, a larger than life non-fiction that narrates on the childhood and growing up of Alexandra Fuller in the southern part of Africa. Her parents participated in the Rhodesian war, a fail attempt to establish the white supremacy. Having lost the war, they moved to Malawi and then to Zambia where they finally "settled". Her parents were reckless and racists who wallow in their ignorance. I am not surprised that her mother at some point ended up with a nervous breakdown, stark raving mad.

Nevertheless, this is a memoir that I highly enjoyed, Alexandra Fuller was blunt and true to her self and her readers in narrating her memoir. I might not like some of the stories narrated therein, but it is her story not mine. It was an amazing read, extraordinary and striking. I had this desire to read on and non stop. It kept me on the edge of my seat. Incredibly moving. I highly recommend, 5 star read. I would also strongly recommend Zenzele: A Letter For My Daughter right after reading this non-fiction. Both were set in Zimbabwe.

My copy of this book was published by Random House Paperbacks New York, 315 pages.
Posted by Mary Okeke Reviews