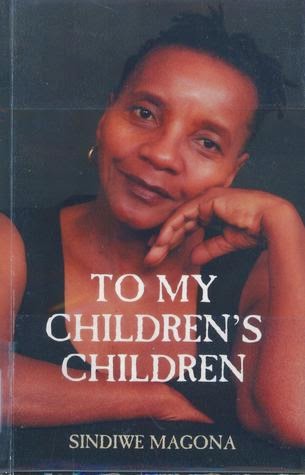 To My Children's Children is Sindiwe Magona's autobiography that narrates on her growing up and coming of age in South Africa during apartheid. Written as if she is, precisely, narrating her life story to her children's children. Hence, the title. The book started with:

I was born in the Union of South Africa before Great Britain handed over our land to the Afrikaner;..... Then, we were called Natives by polite white people, and kaffirs by the not polite ones, basking in the impunity they enjoyed before the law

Born in rural South Africa life flowed easily, until death interrupted the rhythm. Curiously, at the same time, the Afrikaners came into power bringing along with them their apartheid government that lasted from 1948 to 1994. In the township, where she
and her only brother moved to live with their parents, she started to experience the dire consequences of apartheid. To mention a few, midnight police raid, racial segregation, poverty, movement restriction, uprooting and so on. However, she made it to teaching school and graduated. Her parents and extended relatives were proud of her until she became pregnant out of wedlock for a man who barely could take care of himself. Anyway, which black person could take care of themselves with dignity in apartheid South Africa? Since the system reduced them all to working robots with a meagre salary. Poorly surviving with a child, she had two more children, that was when life became unbearable. To make matters worse, her "husband" abandoned her with three children. Very young and jobless, she resorted to working as a housemaid for the privileged whites, in my opinion, which inspired her to write her second novel Living, Loving and Lying Awake at Night.

Interesting autobiography, the middle not so much, which almost made me abandon. The writing is sometimes, sort of difficult to follow. Though, it shouldn't discourage you from reading the book if you are interested in studying the damages of apartheid and the coming of age of a black woman in its system. By the way, I found out that "Forced to Grow" by same author is a sequence to this autobiography. Which, I hope to read. I look forward to finding out how she finally survived.

My version of the novel is the one published by the Women's Press Ltd, 1991.