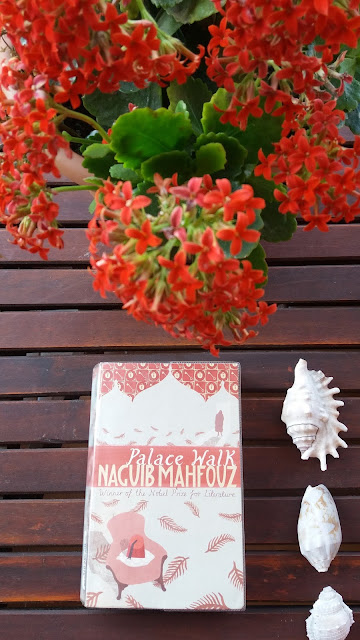 Palace  Walk is a story set in the beginning of the 20th century. The story of Ahmad Al Jaawad and his house hold in a continuously evolving Egypt. He has a son, Yasin, with his first wife. Their marriage is quickly followed by a divorce because she is a woman of her own ways and wouldn't tolerate her husband's control.
Ahmad marries for the second time to Amina, a submissive woman in every sense of the word. Together they have Khadidja, Aisha, Fahmy and Kamal. Ahmad rules his household with an iron hand and instills fear in his children and wife. For instance, he asks his wife to leave when he finds out that she left the house without his permission in his absence.

However, what his family does not know is that Ahmad is a totally different character when he is with his friends, he loves music, women and wine. Yasin, his oldest son, soon discovers his father's other facet and realises where his own
love for women and alcohol comes from. Nevertheless, Yasin went too far by trying to rape the woman who has been working in their household since they were little children. That is when Ahmad decides to find him a wife. Yasin's wife, Zaynab is of a different bred, Turkish descendant, she does not understand the harshness of Ahmad, her own father, who is Ahmad's best friend, is more liberal. On the other hand, Amina, Ahmad's submissive wife, cannot take in the fact that Zaynab wants to live a more liberal life, is she not a woman like her?

"She would not admit that Zaynab had a right to be angry about her honor. She considered it a form of coquetry of which she disapproved. She began to ask herself, "How can she claim rights for herself that no other woman has ever claimed?"

Fahmy, Ahmad's second, son is sent to law school and later on, against his parents will, becomes one of the organiser of the demonstrations during the invasion of the British. He tells his mother:

"A really patriotic mother would trill with joy at her son's martyrdom."

"May God be my witness to what the young master has said.... A mother trills with joy when her son is martyred? Where? On this earth? Not here or even underground where the devils reside."

Aisha's and Khadidja's (Ahmad's only daughters) only aspirations is to get married, which is not alarming as this book was written in 1956 and set in the early 1900, the historical context in Egypt of that time limits the role of women to wives, mothers and house keepers. Little Kamal, is everywhere, like a child, always asking questions.

This novel is a piece of art which consists of 500 pages with tiny letters. Mahfouz took his time with words, he immortalised the way of life of the Egyptians in the early 1900. He touched all aspect of life during that time: being  a woman, man, divorced, marriage, growing up, pregnancy, racism, colourism, religion, politics, revolution and many more. There is nothing Mahfouz left behind.

I have bought the second part of the trilogy, which I look forward to reading.  It goes without saying that I highly recommend.

Naguib Mahfouz is winner of the Nobel Prize Award in Literature 1988.