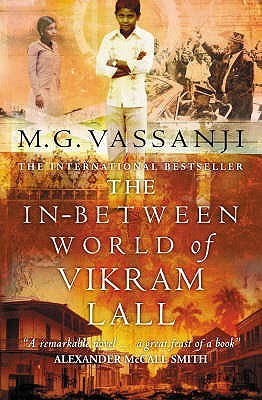 Kenya 1950, racial segregation in full swing. Vikram Lall and his sister are Kenyans of Indian descent, friends to Njoroge a Kikuyu whose grand father is their gardener, to Bill and Annie Bruce who were white British. Mau Mau, mainly Kikuyus, were also in the height of activity, fighting for their freedom.
The In-Between World of Vikram Lall narrates the relationship between these children in a racial segregated Kenya all the way to its independence through the voice of Vikram Lall.

Finally, Kenya got its
independence after all the fight for freedom. Power is transferred from the British to the Kikuyus, as a result a different set of conflicts were generated. Did the Kenyans of Indian descent along with the natives really embraced the true meaning of independence? Or let's say none of them was really interested in freedom in the first place, they just have this vested interest in kicking the British empire out of the country.

Njoroge, Njoroge, look around you, said my uncle. Don't you see who's got the prime property now, the lion's share of the Kenya Highland previously owned by the whites? Why, its the Old Man and his cronies, some of whom even collaborated with the British! Who's getting fat on the land? Mau Mau are now languishing in prison-because they dare ask, Where is the land we fought for?

This is a very well written and researched historical fiction that narrates on the history of Kenya through the Asian Africans, their experience and stand during the racial segregation and independence. What does it really mean to be an Asian (Indian) African, always living in-between?
I really enjoyed reading this novel, it is an insight into the political history of Kenyan , also my first experience with Africans of Indian descent.  A highly political read that I recommend.