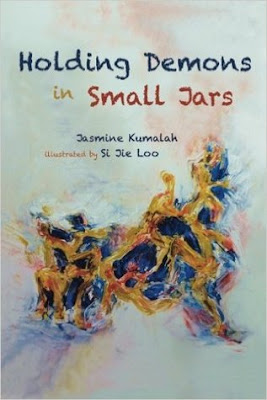 Holding Demons in Small Jar is an intense short narrative tale that asks the following questions: what happens to child-soldiers once the war is over and done with? How do they coexist in a society with people whose women and children they have raped and maimed? People whose houses they have burnt to ashes? Can their path and destiny be redirected? How does society deal with a situation like this?

"The Minister of Justice didn’t care about these war boys. They had been useful during the troubles, but now the war was over. Everyone knew it wasn’t only the rebels who used boy soldiers. In the midst of the war the desperate government turned its eye away from the colonels who recruited young boys in the name of saving the country"

Detective Alu has to investigate the murder of
three boys, ex-child-soldiers, will he do them justice or did they die the death they deserve?

I highly enjoyed reading "Holding Demons in Small Jars", it is a novella surpassingly good that roughly consists of 54 pages so rich in content and illustration, a work of art. Let me add that I love the figure of speech used in the title, which makes me wonder how could one hold demons in small jars? Jasmine Kumalah is highly talented, her illustrator too (Si Jie Loo), I hope she gets to write more. I recommend.

Thank you so much for sending me a copy of your work to read.