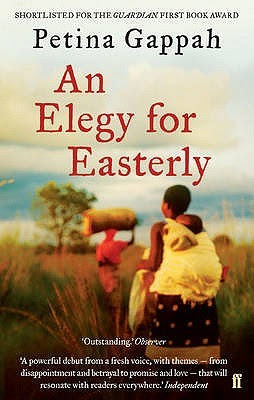 An Elegy for Easterly is a collection of  thirteen short stories that expounds on the socioeconomic political situation of the actual and the good old days Zimbabwe.

Let me say that the stories are funny, witty and most of the time tragic. Tragic because of the corruption, inflation, despair, poverty, HIV and AIDS constantly present in every backdrop of each story. For instance the story "The Cracked, Pink Lips of Rosie's Bridegroom"  you can feel
the pressure on women to get married, Rosie is so desperate to tie the knot that she does not care that her groom is obviously down with AIDS. Everyone turned a blind eye, of course they will, let he who is not infected or has not buried a relative who died from the disease cast the first stone.

In addition, what baffles me is
"adultery" being the recurrent subject matter in most of the tales; starting with "At the Sound of the Last Post" the corrupt politician has his "young model" down town, he ended up dying of AIDS, a disgrace to his wife. "An Elegy for Easterly" picked as the title of the book, a hard working man desperate for sex in the absence of his wife sexually took advantage of a young mad woman, that was how he broke the ice and started sleeping with other women. "Midnight at the Hotel California" the male character boasts about how he struck a deal made a lots of money and showered both his wife and mistress with luxuries. In "The Negotiated Settlement" a husband emphasises  how unprofitable it is to keep a mistress, he'd rather seek their company then let them be.

In my opinion, "An Elegy for Easterly" is very well written, however, I would not say it is a page-turner, neither is it a mind-blowing nor a ground-breaking novel. Do I recommend? Yes, especially to all lovers of short stories. Also bear in mind that a whole lot of Shona and or Zulu is used in the novel, which could be a bit of a distraction though it should not.  I believe Petina Gappah is simply being candid in her description of Zimbabwe.

Let me know your thoughts.
Posted by Mary Okeke Reviews