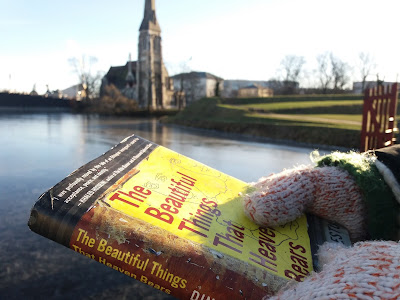 An Ethiopian refugee flees his home country to the United States of America after his father is brutally assassinated. He lives with his uncle, who also is a refugee, and later on moves into a lowly neighbourhood where he opens a store and meets a woman and her daughter. The Beautiful Things That Heaven Bears might seem like another simple typical immigration story, far from, it narrates on the fate of a
man not sure if life is still worth living after he has lost it all. Unsure how to move on and where to start from.

This novel reads more like  a diary entry, Sepha narrates about the political situation in his home country, how life use to be before the revolution, before he had no option but to flee. His uncle goes from being one of the most respected men in Ethiopia to a mere refugee living in an over crowded building in the outskirts of the city, they acquire odd jobs in order to survive, make refugee friends, tirelessly working towards the American dream and strongly craving for home. This is a debut novel sensitively written and subtly narrated from the heart, not the mind.

Another interesting topic you will read is the situation of power and social class in the U.S.A and the housing situation which is told through a sentimental relationship he has with the woman he meets and her daughter.

I highly recommend. However, I'd suggest you first of all read Beneath The Lion's Gaze by Maaza Mengiste, it would give you a proper understanding of the revolution that sends Sepha to the U.S.A seeking for refuge. The picture above was taken in Copenhagen near St. Alban's church. Finally, I begin my review for 2017.