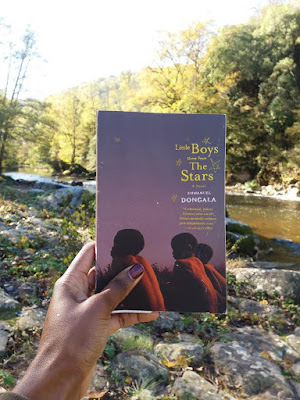 "Little Boys Come from the Stars" is a story told from the voice of one of triplet brothers, Matapari (Michel). He was born a day after his twin brothers were born, sort of a miracle child. In my opinion, an account that did not add much to the story.

He narrates about the political life in the Republic of Congo, its independence from the French, the role he, his beloved grand father and his father  played. He narrates about corruption, nepotism, coup d'etat, revolution and democracy in his home country.

His father like his grand father is very learned and just in his ways. His mother is
a dedicated christian. His uncle is a sharp opportunist who joined the government only for his own benefit. Matapari's triplet brothers were not really present in the whole picture. Even if Matapari were the only child, it wouldn't have made any difference.

This is not a novel I cannot proudly say that I enjoyed, I find it monotonous and repetitive, perhaps it could be due to its translation, it was originally written in French and I guess much was lost in translation. For instance, how do you translate satire from one language to another?

Nevertheless, I'll still like to give Emmanuel Dongala another chance by reading his other novel Johnny Mad Dog. Have you read any of his work? By the way, this is my first read from the Republic of Congo.