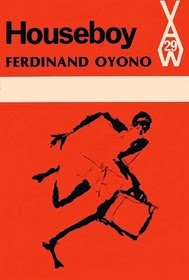 Houseboy as the title says is the story of a houseboy called Toundi. During the colonial period in Cameroon, he left his parents to work as a domestic male servant for the white men in his village. From one household to another he narrated his experience in form of a diary.
Firstly, he was fascinated by the European way of life; although, gradually, he came to realise that all that glitters was not gold. He saw how the white men patronised and dehumanise his fellow villagers. As a result, he started finding fault with the principles of the "so called" Europeans. Which, unambiguously, led to his downfall.

"Everybody told his own little African story to refute him and demonstrate that the African is a child or a fool....."

In one occasion his adulterous madam once told him

"....you are a conscientious worker... but you haven't got that joy one finds in African workers... You  give the impression that you are doing a houseboy's job while waiting for something else to come along"

Worst of all, Christianity was their perfect weapon to indoctrinate Africans. The same Madam asked Toundi to start forming a family since they were paying him enough. He  replied.

"Perhaps, Madame, but my wife and children will never be able to eat and dress like Madame or like white children"

"Oh dear, you are getting big ideas. You must be serious. Everyone has their position in life. You are a houseboy, my husband is Commandant... nothing can be done about it. You are a Christian, aren't you"

"It was terrible. I thought of all the priests, all the pastors, all the white men, who came to save our souls and preach love of our neighbours. Is the white man's neighbour only the white men? Who can go on believing the stuff we are served up in the churches when things happen like I saw today..."

This was not a novel I thoroughly enjoyed; however I recommend it if you want an insight into (pre) colonial Africa. It is as well part of the African Writers Series, click here for more info. Please bear in mind that the novel was originally written in French, in case you might want to read the original version.

My first novel read in 2014, lets see how my reading goes this year. No pressure, please.
Posted by Mary Okeke Reviews