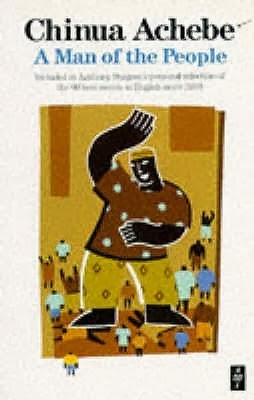 "A Man of the People" written in the first person narrative is about the selfishness of politicians in a society rife with corruption. And its consequences.
Mr. Nanga has been  Odili's teacher sixteen years or so before he went into politics and became Chief the Honourable M. A Nanga, MP "the most approachable politician in the country....., a man of the people".
During one of his political tour in his village, they met again and Nanga used the opportunity to invite Odili to his house in the city. In Chief Nanga's house, Odili discovered, with evidence, that his ex-teacher was involved in a lot of unethical political practices. Abuse of power and authority. As a matter of fact, in my opinion, Chief Nanga was an unscrupulous politician who was ready to do anything for his advancement. He, in fact, never cared for the people, even if he was referred to as "a man of the people". However, Odili, his guest observed, took advantage when he could but never questioned his methods until it was his turn to suffer the consequences. As a result, he retaliated and swore vengeance.

"What mattered was that a man had treated me as no man had a right to treat another - not even if he was a master and the other a slave; and my manhood required that I make him pay for his insult in full measure. In flesh and blood terms."

Hence, began his plan to carry out his revenge on  Chief Nanga as the country was in the throes of reaching a boiling point that erupted in coup d'état.

This is one beautiful and  realistic novel by my late townsman, Chinua Achebe. A satirical novel about the pathetic state of many African countries right after independence from the Europeans. An easy, enjoyable and interesting read, some times funny; though, sad. What really bothers me is that things like this still take place today. So said, I highly recommend.

It goes without saying that  Chinua Achebe is one of my favourite writers, I hope to get to read all of his works. He is a genius and I love him. Lastly, this is part of my (undeclared) challenge on reading all of the African Writers Series (hopefully).