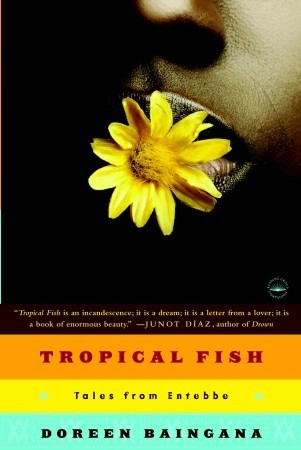 "Tropical Fish" narrates the story of three Ugandan sisters, who were from Entebbe's upper middle class until the death of their father as a result of his drunkenness. Rosa, the eldest sister, was promiscuous, she died of AIDS. Patti the middle sister, turned into a born again christian. And Christine the youngest went to Los Angeles, came back eight years later to pick up a job amidst the struggles of discovering her inner self.
Accounts of their lives during Idi Amin regime was as well narrated on. A regime famous for giving  the people of Indian descent in Uganda 72 hours to leave the country.

Actually, Christine's story was what made me buy this novel. I read part of her story in "African Love Stories". How she was indulged in a kind of weird carefree sexual relationship with a white man in Uganda. Not even when she was pregnant of his child. I wonder if that was love or what? However, I found myself still confuse after reading the purchased novel.

Moreover, Tropical Fish was not narrated straightforwardly as one might expect. Instead, it only covered certain periods of the lives of the three sisters, that is, some specific aspects of their lives. From there on, as a reader, we were expected to make the connections ourselves. Not that it was a difficult task, just that I found the style somewhat peculiar. I hope you aren't getting the wrong end of the stick because Doreen Baingana is  a creative writer. I guess I was expecting the novel to sweep me off my feet and it did not. Perhaps, it is just me not the novel, considering the fact it won many important awards, the Commonwealth Writer's Prize one of them, as Best First Book Africa 2006. All the same, I must confess that in my opinion, it was not up to four stars, it was somewhere between 3.5 and 3.75. It left me slightly disappointed.

Please click here to read reviews of other novels that have won the Commonwealth Writer's Prize.
Posted by Mary Okeke Reviews