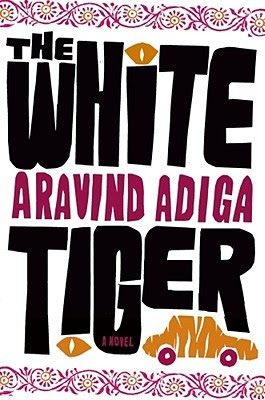 I have read quite a few novels set in India or by writers of Indian heritage and one of the topics that keeps on popping up is the blatant poverty and caste discrimination that perpetuate their society, The White Tiger is no exception. We get to read about the life style of an upper-middle class through the voice of their servant Balram. It is quite interesting as Balram tells us what he knows about his master  through pieces of information he gathers while being enslaved.
Balram narrates his ordeal with a witty sense of humour, you might  find yourself laughing in front of his adversity.

"The Great Socialist himself is said to have embezzled one billion rupees from the Darkness, and transferred that money into a bank account in a small, beautiful country in Europe full of white people and black money"

Balram narrates about life in his village Laxmangarh, his mother died when he was very young, his father a rickshaw puller died miserably of tuberculosis. A life of misery. One thing led to another and Balram becomes a driver and moves
to Delhi with his boss Mr. Ashok. That is when he decides to kill him and break
off the Rooster Coop. Below is an example of the effect of the rooster coop as described by Balram, he knows his fate, however, unwilling to break out or rebel, instead abiding in his role of servitude.


"The way I had rushed to press Mr Ashok's feet, the moment I saw them, even though he hadn't asked me to! Why did I feel that I had to go close to his feet, touch them and press them and make them feel good - why? Because the desire to be a servant had been bred into me: hammered into my skull, nail after nail, and poured into my blood, the way sewage and industrial poison are poured into Mother Ganga"

Why did Balram decides to murder his boss? He is not like the average servant, he is bright and hard working, if given the necessary opportunity there would not have been any need for enslavement. He finds himself stuck and realises the need for action, if not he knows he'll end up like his father. he starts to break off:

A debut fiction that won the Man Booker Prize in 2008, I recommend. If you'd like to read my reviews of other books set in India or by Indian writers please click here.