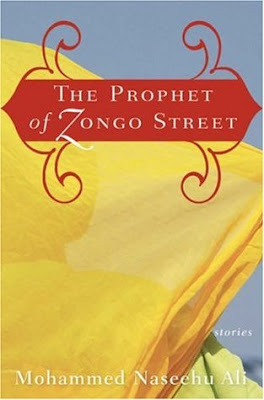 I discovered Mohammed Naseehu Ali through his published story "The Manhood Test" in the  anthology "Gods and Soldiers" edited by Rob Spillman. Whose book I have since added to my TBR.

There are ten collection of short stories included in "The prophet of Zongo Street" most of the stories are mainly about people who live on this street, some few were set in the USA. However, let me talk about the ones that kept me on the edge of my seat;

Rachmaninov, yes you read well, the Russian composer and pianist. Well, that is the music in the background when an aspiring Ghanaian artist  and his date were under the effect of an overdose and everything else was in discordant; sex, hallucination, drug and
alcohol.  Not that I like the story per se, it was in fact disturbing, however, I was thrilled and wondering what would happen next.

The Manhood Test: a hilarious story where a man in order to prove that he isn't suffering from erectile impotence is requested to have sexual  intercourse with his wife in the presence of a witness. A sensational disclosure on Zongo street.

Live-in: a lady moved from Ghana to the USA, where her sister secured her a job as a live-in maid. She realised how a deal of a hard work and sacrifice it is to make a living in the western world, and wouldn't like to spend the rest of her life like that.

Finally, The True Aryan is a story that took place in a taxi trip, with this story Mohammed Naseehu Ali manifests his talent as a writer. I don't think it is easy to write an engaging and captivating story solely based on a chitchat conversation between a taxi driver and his passenger, indeed, an enjoyable one.

The rest of the stories are OK, however, I'd look forward to reading more books written by Ali.

Have you read this collection of short stories? have you heard about him before? Let me hear from you.
Posted by Mary Okeke Reviews