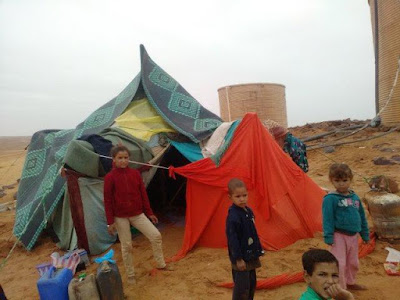 Briefing Notes, 23 October 2015
This is a summary of what was said by UNHCR spokesperson Melissa Fleming – to  whom quoted text may be attributed – at the press briefing, on 23 October 2015, at the Palais des Nations in Geneva.

The guest speaker for this item was Amin Awad, Director of the Bureau for the Middle East and North Africa (MENA) and Refugee Coordinator for the Syria and Iraq situations.

Heavy rains and flooding have caused widespread damage to five camps providing shelter to some 90,000 of the most vulnerable Sahrawi
refugees in south-west Algeria's arid Tindouf region. UNHCR and its partners have begun to assist some 25,000 people (5,000 families) whose homes and food supplies were damaged or destroyed.

The number of people in need could increase as the rains, which began last Friday, are forecast to continue until at least Sunday. There have been no reports of casualties among the refugees in the hardest hit Awserd and Dakhla camps as well as Laayoune, Boujdour and Smara camps.

UNHCR is playing a leading role in the humanitarian response, working with the Sahrawi refugee population, as well as UN agencies WFP and UNICEF and other partners. In a joint effort, bread, fresh food and drinking water is being delivered to the camps. Algeria's Department of Civil Protection is also assisting.

Those left homeless are being sheltered by relatives and neighbours, but we plan over the next two days to airlift in 1,500 family tents, 10,000 plastic sheets and 400 plastic rolls to address the immediate shelter needs, as well as 10,000 blankets, 2,000 jerry cans and kitchen sets. UNHCR will also provide shelter materials to repair buildings.

An assessment conducted earlier this week by the Sahrawi Red Crescent shows that hundreds of mud-brick homes have been destroyed or damaged. Those living in traditional Sahrawi tents were spared the worst of the devastation, but only a minority of families possess such tents.

Other infrastructure damaged or destroyed includes dispensaries, hospitals, schools, shops, livestock sheds. Meanwhile, latrines will need to be rebuilt and floodwaters will need to be quickly removed to avoid disease, contamination of water sources and building collapses.

As of Wednesday, with the rains continuing, all five camps at Tindouf – Awserd, Dakhla, Laayoune, Boujdour and Smara – were flooded completely or in part. Although there is little rain in the Sahara for most of the year, when it does come it can be devastating, especially for mud-brick constructions.

Sahrawi refugees began arriving in Tindouf in the mid-1970s after Spain withdrew from the Western Sahara and fighting broke out over its control. Most of the Sahrawi refugees have been living for some 40 years in the harsh Tindouf area.

UNHCR is urgently appealing to donors for emergency funds to respond to the flooding crisis. UNHCR's 2015 budget for the Tindouf operation is around just 20 per cent, leaving a huge funding gap and restricting operational activities. 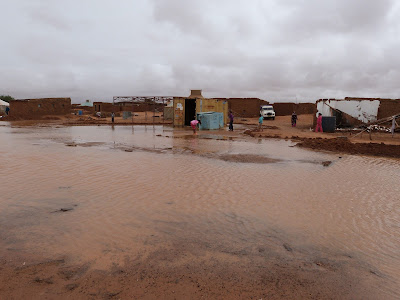