Half of a Yellow Sun the Movie *** 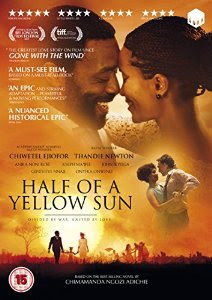 I am glad I finally watched Half of a Yellow Sun the movie. Let's keep in mind that movies are different form of art that cannot totally capture the real essence of a novel. With that said, the film was good although I did not enjoy it as much as I did the novel. To start with, Thandie Newton was amazing in her role as Olanna, she was quite impressive. Nevertheless, if I should give an Oscar to an actor in the movie, it would be to John Boyega, his performance as Ugwu was splendid. In my opinion, though it's been a while since I read the novel, I think he gave more substance to "Ugwu" than in the book.
Secondly, I did not like  Anika Noni Rose as Kainene, she was not convincing. Neither was Genevieve Nnaji the one who played Lara Adebayo. In my opinion Genevieve Nnaji should have played Kainene and they should have found someone else to do Lara Adebayo.

Furthermore, the actors' accent betrayed their origin. As an Igbo
person, though I have lived more years out of my country, I could tell outright that Thandie Newton and Anika Noni Rose weren't t Igbo from the way they spoke the language. Perhaps, they thought it is a minor case since it is a problem only an Igbo person would detect, anyway. However,  in my opinion, they should have practised more.

To end on a positive note, I like the combination of fiction and history. For instance, there were real images of Ojukwu leader of the Republic of Biafra and real images of Nigeria at that time. Finally, I would not have seen the movie if it was not for the novel so my advice to you is do not swap the movie for the book. You will be highly disappointed. Watch the movie if you are simply curious like me because the film doesn't live up to the book.