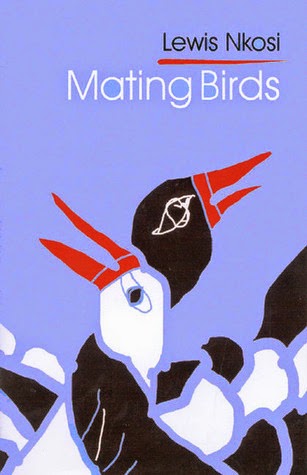 Mating Birds is a fine poetical writing that narrates on one of the many crimes of apartheid. To start with, the writer's dedication melted my heart:

For my grandmother, Esther Makatini, who washed white people's clothes so that I could learn to write

In form of a diary, a black man on death row for allegedly raping a white woman during apartheid narrates his ordeal. Like a showcase, he is displayed to anyone who wants to know more about him. Most especially, to know what demons impulsed him to even dare think of a sexual experience with a woman of a "superior race". That is how he drew the attention of  Dr. Emile Dufré, a Swiss-German doctor that flew all the way from Europe to inquire about what in his back-ground might have triggered such "reaction". Hence, began his need to keep a diary.
The saddest part of the story is
that he is assumed guilty and declared mentally unstable without prior investigation. Everyone (he and the black South Africans) knew that his trial was more of a circus before the slaughter though, none of them was surprise:

Why believe the word of the girl against mine, for example? Except for the whiteness of her skin, a color that has caused more trouble and unhappiness in the world than the color of any other skin, what particular claim to virtue can this girl be supposed to have?

He did not hesitate to narrate on his childhood and the consequences of apartheid that led to the death of his father. And in my opinion that also led to his obsession for Vanessa Slater (the girl he allegedly raped):

I dreamed of her, and in my dreams I touched her soft skin and smooth hair. (In reality, as I was later to find out, the skin was neither so soft nor the hair so smooth as I had at first imagined.) All the same, the girl eventually became a kind of sickness for me

Both individuals were simply obsessed with each other, and apartheid fuelled their obsession.

That is how it was between Veronica and me. Apartheid? We had defeated apartheid. We had finally perfected a method of making love without even making contact, utilizing empty space like two telepathic media exchanging telegraphic messages through sexual airwaves.

I enjoyed reading this novel. I reached my conclusion; Veronica Slater is no saint, she enjoys prodigious lovemaking. She is frantic and frenzy in sexual practices that led to her participation in orgies (I am in no way saying that she deserves to be submitted to sexual intercourse against her will). Nevertheless, she is not a victim as the apartheid society wants to make one believe. Instead, she is another excuse to justify the hideous crime and conspiracy of the apartheid government to get rid of yet another black fellow. A way of oppression, repression and social brutality against a particular group of people, their only aim being to eliminate them.

No, I'll die of a vaster, deeper, more cruel conspiracy by the ruler of my country who have made a certain knowledge between persons of different races not only impossible to achieve but positively dangerous even to attempt to acquire. They have made contact between the races a cause for profoundest alarm among white citizens.

I highly recommend, though it is loaded with sexual connotations. An adult read. Lewis Nkois was born 5th of December 1936 and died 5th of September 2010. I look forward to reading more of his novels. My version of the novel is the one published by St. Martin's Press New York, the first published in 1986.