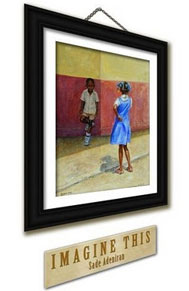 A diary entry of Lola Ogunwole, born in England, abandoned by her mother, spent time in foster homes and was finally shipped off to Nigeria with her brother. In Nigeria, she was sent to live in the village with her grandmother while her brother worked like a slave in an uncle's house in the city where he finally kicked the bucket. Lola's life was not any better, only that she did not kick the bucket. In fact, hers was a baptism of fire. Always wretched and hunger-stricken.

She narrates her ordeal in her diary, her plight in the village, in the boarding school and at long last in Lagos. Her father never really cared for her, not even when she lost her only brother. He was hellbent on the fact that the African upbringing experience was absolutely acquired through hardship and pain. In short, nothing good ever happened to Lola. In my opinion the title of this novel should have been "Nothing Good Will Happen" instead of "Imagine This".

Although, I have so far enjoyed novels in epistolary and diary format, "Imagine This" was a bit too much to be in the diary format. The dates were not actually necessary to bear in mind each time you flip through a page. Moreover, a bit of pruning would have done the novel some good. I found Lola re-writing her plight over and again. In spite of that, it was the African Regional Winner of the 2008 Commonwealth Writers Prize: Best First Book. In addition, I enjoyed the read; though,  it sort of ended in a cliffhanger. I read somewhere that the author is working on the second part of the novel. Hopefully, something good will eventually happen to Lola now that she is a woman.

Finally, it is interesting that stories like this were brought to light. That is, young children that suffer in the name of culture and training. Novels with similar storyline are Powder Necklace by Nana Ekua Brew-Hammond  and the award-winning Purple Hibiscus by Chimamanda Ngozi Adichie

Bear in mind that even if there was a good dose of hardship in this novel, it is still a [serious] young adult genre. I would enjoy the second part of the novel more since Lola would be a grown up woman by then.