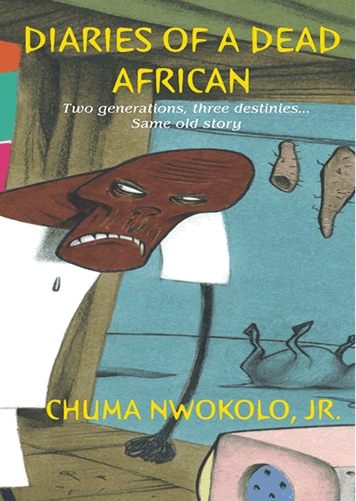 If you say "I Do Not Come to You by Chance by Adaobi Tricia Nwaubani" was the first novel that expounded on the 419 topic, that is because you have not yet read Diaries of a Dead African. Published six years before. An epistolary novel, a diary entry of a father and his two sons.

To start with, the first entry belongs to the father, Meme Jumai, a poverty-stricken farmer, so wretched that his wife abandoned him and left him with nothing. He barely had enough food to survive on until the next harvest. In his diary, he narrated how his every day survival was a contant struggle and how he gradually turned into a laughing stock of  his village. Firstly, because his wife left him and secondly, because starvation was ridiculously doing away with his life. In fact, it eventually hastened his death.

Next, is the diary of his son Calamatus Jumai, con-man by profession, whose entries I thoroughly enjoyed. He came back to his village Ikerre-Oti to bury his father. However, after reading his father's diary, he felt so sorry for him that he vowed to avenge his death. Unfortunately, he died in the process (as a matter of fact he killed himself) because he felt ashamed when a secret that humiliated his persona was revealed. Just like that all his plans ended in a fiasco.

Then, comes the diary of Abel, Calama's elder brother, a writer that was doomed to failure. He wrote anyway. He was determined not to repeat the same mistakes as his predeceased family members. Even so, there is no way escaping the fact that he was already in a weighty problem when his late brother made him beneficiary of an important 419 bank account.

As I mentioned previously, I took delight in reading Calama's diary; it goes without saying he is my favourite of the three. I found him hilariously funny. He was candid about his business (419er), never kept it secret. And would not mind initiating any one who was willing and has the talent. Sadly, he eventually died in the most piteous way. Few entries from his diary:

......Were you waiting for me to print and post you an invitation for your father's burial? When you heard he was dead, what did you think would follow? Baptism ceremony? Look, carry yourself out of this house before I call my boys, otherwise what will happen to you would surprise you.

Referring to one of his friend in the 419 business,

Despite all his money, FazO had a complex or something. The worst thing he hates is for anyone to call him a thief.... Me, I don't mind if people call me a monkey - so long as I still have my money.

From one of his letters to his victim:

.....Please don't try to escape with my share of the money. I don't want to arrive in Vegas and start hearing story that you went for summer holiday to Parrot or is it Canary Island.

Diaries of a Dead African could be a  perfect example of what Chinua Achebe was referring to, when he said that English was an international language. That, African writers should use it in a way in so as to deliver their message and carry their African experience. No need to use it as the natives. Nwokolo did just that

I greatly appreciate the fact that there are writers who would risk coming up with a different style of approach. Which, of course is stunningly attractive. This novel was fun, interesting and quite comical. Nothing like anything you have ever read before. I wholeheartedly recommend it to all and sundry.

I first heard about it on Image Nations and it caught my eye.